Get me outta here!

I am well-armed: I have a special talisman, given to me by the friend with whom I had always planned to cross Bass Strait, I have a sackful of well-wishes gifted from those few friends in whom I had quietly confided, and I have Dutch courage, found in my whiskey bottle.  I gather all these resources and launch.

We head down the channel, working from marker to marker, into the headwind under leaden skies.  We turn and even sail out of Corner Inlet.  We stop for a food and pee break.  With the next three day’s kayaking having no possible landings, we choose to use them today.

It is cold, it is exhilarating, we are underway.  An emu keeps pace along the shore, us in the shallows.  The sun occasionally breaks through.  I’m doing it!

Rabbit Island, the water starts to get bouncy with tidal flows.  Now the wind is getting serious.  The bulk of the Prom no longer provides protection.  I’m paddling my little heart out.  Passed Three Mile Beach.  Next up, Five Mile Beach,  that’s Eight Kilometre Beach.  Even moving at 4 kmph, that’s two hours.  But I’m not moving four kph, it’s less.  Two hours plus.  Okay, is it wise to continue?  To use up all my energy today?  Isn’t this just a romp down the coast of the Prom, with tomorrow being the BIG day?  Should I suggest we land and set up camp?  We edge closer in, gaining a tad more shelter from the headwind.  It’s a slog, Five Mile Beach.   The GPS later tells us we’re travelling between 2 and 3 kmph.  Somehow we arrive at the end, back to cliffline and some shelter.  Okay, just keep on paddling. 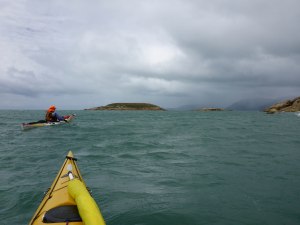 Heading towards Rabbit Island, and the tough stuff

Sealers Cove and bullets of wind blast off the landscape and straight out to sea.  Harry’s experience tells him we’re in at least 30 knots of wind.  After that hairy experience we edge slowly into Refuge Cove.  It lives up to its name, no nasty surprises here, just calm and shelter.

And so begins the routine: land, unpack, set up camp, gather weather data for tomorrow, consider and plan, eat, sleep.