Get me outta here!

In July-August 2012 I was part of a group of six kayakers who paddled 380km from Townsville to Palm Cove, Cairns in far north Queensland. This truly was a ‘trip of a lifetime’, undertaken with the very best of mates. Here is a recount of that expedition, as published in Salt, the magazine of NSW Sea Kayak Club.

Standing alone on the sand, away from all the holiday-makers, Harry called to us, his urgings lifting both our spirits and our bodies. With one last spurt we paddled that final kilometre, landing on the sands of Palm Cove in far north Queensland.

Our journey started 21 days earlier from the shores of Townsville, 20 nights under canvas, 12 islands and 380km. No, it started months before when three of us shared a phone conference and dreams. A trip along of the coast of Hinchinbrook Island morphed into an expedition from Townsville to Cairns. Almost five months of planning and preparations passed before we gathered in Lindfield, Sydney to load up, finalise checklists and get a last night’s sleep before the road trip commenced.

Driving quietly out of Sydney, the dark skies lit by planets, Mike, Peter and I went north for 2,500km staying first in a WWII bunker in Miles, Queensland and then in the last cabin available within a 300km radius of Mackay on a wet and windy night.

With 380km to cover in 21 days, we had lots of back-up options if the wind and weather gods chose not to favour us. If the Australian Defence Force needed to undertake some last minute bombing practice, we had a plan. There were alternative finish places noted on our GPS waypoints, phone numbers for alternative caravan parks, maps given to our pick-up driver. Yet to our amazement, as the days unfolded, we were where we were meant to be. Apart from one decision to change campsites due to cyclone damage, our plan worked.

It was an ambitious plan: a group of six who never all came together until the night before, never paddled together as a group until Day 1; new and untested kayaks and gear; various body ailments. A plan that started and ended with long, open crossings of 35km. Perhaps our audacity in the face of potential obstacles earned us safe passage.

Preparations prior to launch

When Saturday 21 July 2012 dawned clear and bright, we transferred kayaks and all our gear across the road to the sands, loaded and made ready to launch. Finally all the preparations stopped. All the mad hustle and to-and-froing came to an end, this was it. With heavy kayaks, we set out from the protection of Magnetic Island. From Acheron to Havannah, we passed from military target range into the Palm group of islands and on to the national parks of Orpheus and Hinchinbrook.

The first few days were a shakedown. By the time our first rest day, on Orpheus Island, came round we had some repairs and adjustments to undertake. After that our routines developed and we moved from beach to beach taking in the ever-changing scenery, relishing in the tropical waters and finding joys in the great outdoors.

Each island has its own persona. One with granite boulders protecting it, and perhaps us, with its sense of special place in the air. One became a playground at low tide, a place for fun and exploration. Many confined us to their beaches, impenetrable, although there was one that let us through to its summit.

Hinchinbrook Island is a place apart; an island big and high enough to create its own weather. Early mornings could be clear with the summit of Mount Bowen standing tall and ominous; barely-there wisps of cloud growing and developing into complete cloud cover over the summit by midday.

Our first encounter with Hinchinbrook was from the south, at Sunken Reef Bay. A grey and overcast day matched the windswept nature of this beach. Literally wind swept – Cyclone Yasi had tossed flotsam and jetsam all along the shoreline. It provided a creek where we could wash in brackish water. While Margot and I explored and examined the plastic junk amongst the strewn timbers, the others walked inland and upward to Mulligan Falls. Next morning the surf settled, the skies cleared and we made our way north, stopping at Zoe Bay en route. There we moved six loaded kayaks off the sandflats to above the high water mark before exploring, snorkelling and swimming in the clear fresh waters below Zoe Falls.

We kayaked in the territory of the saltwater crocodile (crocodylus porosus). We never saw any crocodiles or even signs of them. I did once feel spooked by the bay we were in.

It was late in the afternoon, the tide had come in over the sandflats resulting in warm, murky water. There was a creek by the mangroves on one side of the bay with a crocodile warning sign. Lippy and Margot had gone ashore to scout for the campsite. I floated in my kayak, remembering the description by Sandy Robson of the bay where she had been attacked, and stalked, by crocodile. Too many parallels with this little bay, I nervously waited for the others, silently urging them to quickly and carefully return to their kayaks and deeper waters. No campsite found, they followed my telepathic thoughts and we moved, to another bay, another beach, a proper campsite found by Peter and Shaan. 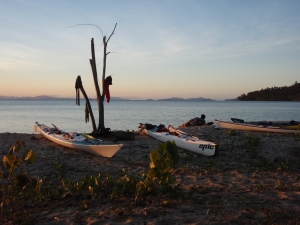 Evening in the tropics

On this beach we re-arranged our plan and stayed put for a while, enjoying early morning yoga, dips into the lagoon, views of Mount Bowen, the company of bushwalkers, hikes further north to Nina Bay, Beach and Peak and the unexpected dramas of a bushwalker in trouble and in need of helicopter rescue. A fall while rock-hopping across a creek led to a bad cut on her leg, not a major drama except that she was miles from anyway, in a remote location.

Leaving our campsite on Hinchinbrook we sailed northwards, stopping to examine the deserted and cyclone-damaged Hinchinbrook Resort near Cape Richards. Crossing to Gould Island we arrived just as a working party completed the installation of a proto-type plastic picnic table and benches. A rest day was spent exploring a corner of this island with its ancient Aboriginal fish traps, spying finches as they built a nest right at the outer end of a tree branch, safely out of reach of sea eagles and goannas, and being bemused by the approach of a bundle of twenty-three teenagers who squelched across the mud flats of low tide. Fortunately, once they burned off some steam with a soccer ball, they settled, camped away from us old codgers and were polite and friendly to encounter. 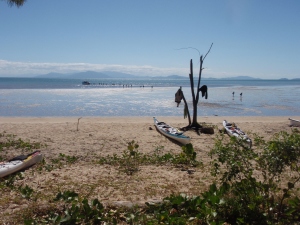 The arrival of the teenagers

From there we tripped further north, through the Family Islands group, now into the heart of Cyclone Yasi damage. Here came our first mainland encounter: a food parcel pickup, a haircut, a visit to the wonders of the modern supermarket and a meal in a restaurant. Despite all the conveniences, I was glad to push off Wongaling Beach the next morning, kayak again fully laden, back to the island solitude. This time to the Barnard group of islands, Stephens then Kent. From there we tracked back to the coast, whale-watching as we went. I took Margot’s advice and was careful not to fall into the mouth of the Johnstone River, a known crocodile habitat. Flying Fish Point bizarrely was exactly that – schools of fish flying from a predator, right to the very edge of the water. If we’d still been in the kayaks with open cockpits, we’d have collected dinner.

From there we followed the mainland coastline for 10km seeing rainforest covered slopes sweep down to pristine, deserted beaches. A turn east and then 20km out to the next island. This crossing wasn’t tricky or rough, yet it demanded my every ounce of strength and focus. Arriving, Peter and I took the scenic and rougher route to the campsite, exploring the more exposed eastern shores of Russell Island.

Our luck continued to hold and on we went to High Island, and further again to land at Fitzroy Island with its tourist resort. A few hours, a few beers, a tasty lunch, all enough to convince that even though the campsite was accessible and well-ordered this much civilisation was too much civilisation for our final night ‘out’. An afternoon crossing to a mainland bay, that didn’t have that mainland feel due to its isolation, and we set up camp.

Our final day was another 35km crossing, just like the first day, only this time there was no lunch spot for landing. We were 15km out from Cairns, bee-lining it to our destination. The seas were calm and flat, the sun shone and we suffered. No winds for sailing, no puffs even for relief, no changing scenery for entertainment, just mirror-flat water, as if the wind and weather gods were telling us we’d been looked after for 21 days so be grateful and be glad.

And we were. Out doing what we love, where few venture, under our own steam, following our chosen path. Right to where Harry called us home.

One thought on “Far North Queensland, with the headwinds all behind us”